With just two weeks to go to my next trip to the US East coast, our last trip to Sunriver two summers ago, is all that’s on my mind. Before our trip back in 2017 Andrew raved about how Oregon was his favourite place in the world, something I just could not get my head around. There seemed to be so many more obvious places to visit in America – NYC or San Fran for a metropolitan hub, Hawii for the beaches, Yellowstone National Park or the Grand Canyon if you were after the landscapes and wildlife. But as soon as we arrived in Sunriver, it all started to make sense. I’m not sure how to describe it properly but there’s a sense of calm and tranquility that I haven’t felt anywhere else. A week of adventuring and relaxing in the central Oregon region and so many fond memories of the trip, I really can’t wait to go back. Here’s my six reasons why Sunriver (and Oregon as a whole) should be on your travel bucket list:

The Air – This may sound like a silly reason to embark on a 19 hour journey (a flight to San Fran or Seattle, plus stop over, a second flight to Redmond, Oregon and an hour drive to Sunriver), but you just don’t realise how stuffy and polluted London air is until you’re in a place that is the polar opposite. Stepping out on the balcony of our lodge in the middle of a pine forest every morning we were hit with a wave of what can only be described as pure nature freshness. Pair this with the deers that walk up to the edge of the lodge and the birds all around, and you could be in a Disney film (I promise I won’t burst into song).

Pine is my new favourite smell, mixed with coffee in the mornings as we sat on the balcony; it’s literally Christmas come early. For the last little while I’ve been burning a Jo Malone pine and eucalyptus candle to try and bring a little bit of Oregon to Richmond.

The Stars – staying in the middle of a forest, miles from the nearest major city = a complete lack of light pollution = a spectacular display of stars every single night. It’s hard to describe the moonlit view and photos really don’t do it justice so I’m not even going to try and share them. But trust me, it’s absolutely stunning. Whether watching the stars from our balcony as we drank G&Ts or gazing up for hours from the steaming hot tub, the only other time that I’ve seen a night time display this spectacular is from Halong Bay in Vietnam, where once again the isolation of the setting meant that the night sky’s true natural beauty could be seen in its element. 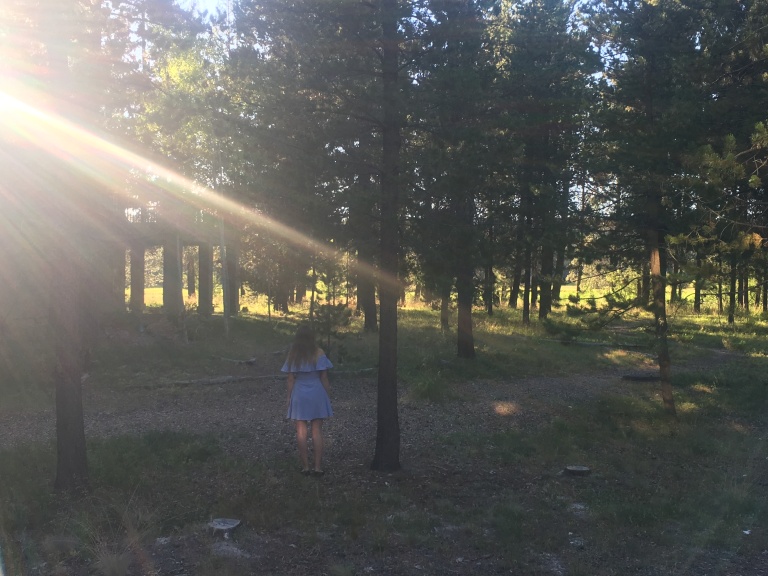 One night we headed to the Sunriver Observatory for the most spectacular display through a range of telescopes – from nebulae to distant galaxies and shooting stars, you can see a whole range of mind-blowing sights that serve to remind you just how tiny Earth really is.

The Deschutes River – during our time in Oregon, we experienced two extremes of the Deschutes River, the “lazy river” experience and white water rafting. I would recommend both and would jump at the chance to do either again (we did the lazy river twice because we loved it so much).

The “Lazy River” experience started a five minute drive from our lodge, at the Sunriver Marina, fuelling up for the journey with a couple of tacos from the truck outside the marina. With a choice of canoes, rafts, or SUPs, it’s an opportunity to float in the most relaxed manner down the river, alternating sunbathing with the odd dip in the river to cool off.

We opted for an eight person raft so that we could take it in turns to row/paddle, as well as a canoe for the keener members of the group. And the scenery was just breathtaking – trees and fields and more trees, with the odd river front house giving me all the future summer house goals (if I could win the lottery right about now that would be fab!) A truly relaxing way to experience the Deschutes River in the sunshine.

I have to say we had serious raft envy as another raft floated past with a case full of beers and a waterproof speaker – our packets of crisps and bottles of water in comparison, showed our amateur status in the world of river rafting. This trip, we’ll be much more prepared – I’m thinking G&T tinnies and a whole host of snacks.

White Water Rafting – after a two hour drive downstream from Bend, Oregon we arrived at the Lower Deschutes in Maupin where our journey would begin. We climbed into our raft, six of us and our guide Goetz who was going to lead us 13 miles down the rapids.

I’ve never been White Water Rafting and it was absolutely terrifying but in a good way. Being in a group of primarily competitive boys (Andrew is one of five brothers) when given the choice we always went for the hardest route. Which meant we conquered some  pretty badass class III rapids, including the infamous boxcar rapids. You can see me clinging on for dear life at the back of the boat below. I have to say, it was one of the most thrilling experiences I’ve had, up there with sky diving – the rapids take you where they fancy as you cling on for dear life and try not to fall in.

We went on our day trip with Sun Country Tours – it wasn’t a cheap day out at $108 per person, but it was 100% worth it for a day full of adventuring and adrenaline rushes, and I won’t hesitate to go back on this trip when we get to Oregon.

Hiking – there’s miles and miles of hiking tracks around Sunriver, too many for us to explore in the short time we were there. We did manage to conquer the routes to Benham Falls and the route around Paulina Lake but there’s hundreds more that take you through the tranquility of the Oregon National parks. You definitely don’t have to be an expert hiker in Sunriver. With a pair of trainers, a bottle of water and a lot of enthusiasm, the tracks are more than manageable for the average person. The beautiful surroundings definitely help the efforts, although if you’re anything like me you’ll be stopping to take a photo every 10 metres or so. The dreamiest way to truly be one with nature for an afternoon. 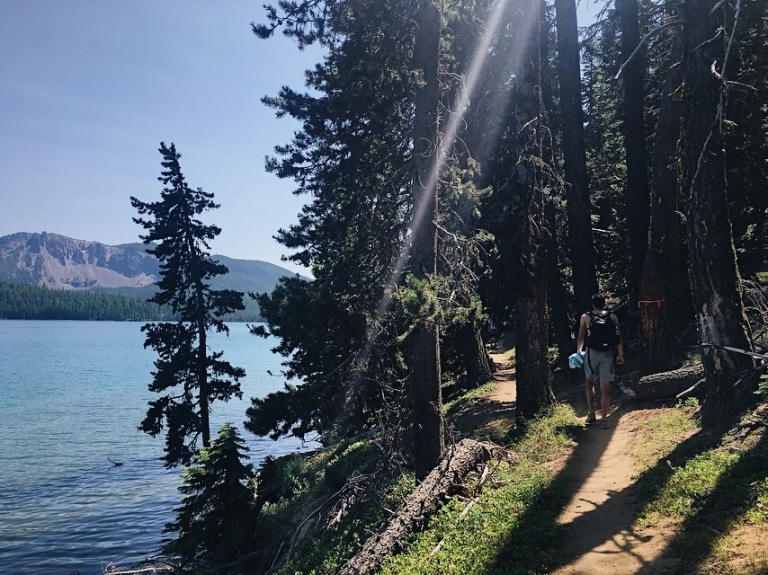 Wild Swimming – in my opinion there’s nothing better than swimming in a natural habitat. I get bored very quickly doing lengths in a swimming pool, with just the tiled walls for a view, and hate the chlorine smell that follows you round once you’re done. In contrast the joys of swimming in a lake or river, surrounded by trees and mountains is an unrivaled sensation.

I spent the week in Sunriver a couple of summers ago constantly prepared with a bikini on under every outfit, ready to strip off and jump in, seconds after finding the perfect spot. Ok this might be a slight lie. Andrew jumped straight in and I did that pathetic gently lowering yourself into the water because it’s icy cold and your toes are getting frostbite thing. Before coming to the conclusion that it would have been so much better to jump right in and get the shock over with. The water that makes up the Deschutes River flows downhill from the mountains, so even in the sunshine its much chillier than you would expect. But I can promise you that once you’re used to the cold temperatures, its the most relaxing place for a swim. 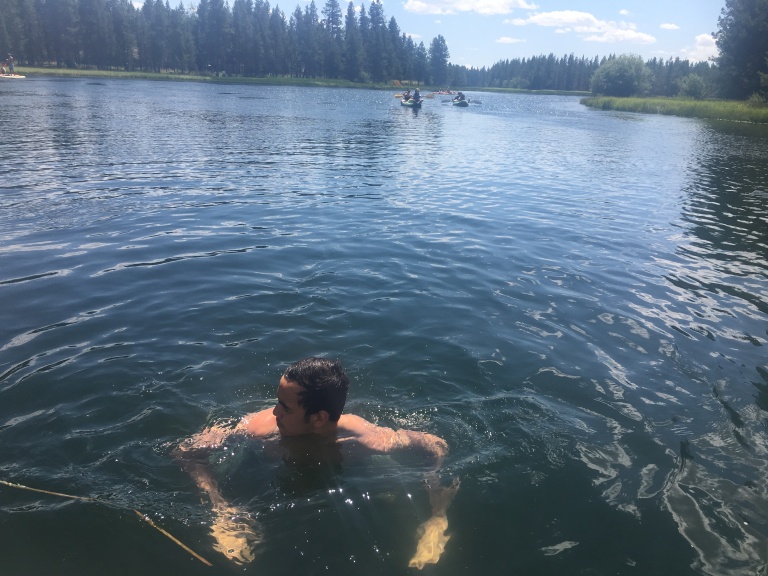 Mount Batchelor – The mountain dominates the horizon from Sunriver – whether floating down the river on a raft or at the driving range (I was reluctantly dragged there one afternoon and used it as the perfect opportunity to soak up some Vitamin D) your eyes can’t help but being drawn to the snow peaked mountain.

Obviously Mount Batchelor is much busier in the winter as a popular spot for skiing and snowboarding, but there’s still plenty to do on a summer break. Whilst the hiking and mountain biking appealed (and terrified in the case of the latter – the thought of navigating a mountain downhill was pretty scary for this gal who insists on having the brakes on whenever there’s a slight decline), we opted for a leisurely ski lift ride to the peak, followed by a lunch break as we enjoyed the views. I can never get bored of the mountains, trees and lakes in this part of the world. And I have to admit, ski lifts are much more fun when you don’t have to spend the whole journey worrying about how you’re going to disembark elegantly and without face-planting at the top with two planks of wood attached to your feet. With more breathtaking views, it was an amazing way to see Oregon from another angle.

On a side note, for any fellow coeliacs out there, definitely eat before you get to the mountain. The cafe on top of the mountain were extremely proud of their gluten free option – a bread-less sandwich. Literally some ham and cheese and lettuce on a plate. Not entirely inspiring if you ask me. After an unsatisfying lunch, we embarked on the hunt for some snow, enough left over for a snowball fight. In hindsight I wasn’t dressed for the weather. Short shorts and snow are not the dreamiest of combinations. And turning up jacket-less meant that I had to borrow a mac from Andrew’s mother, who says I’m not a good adult? 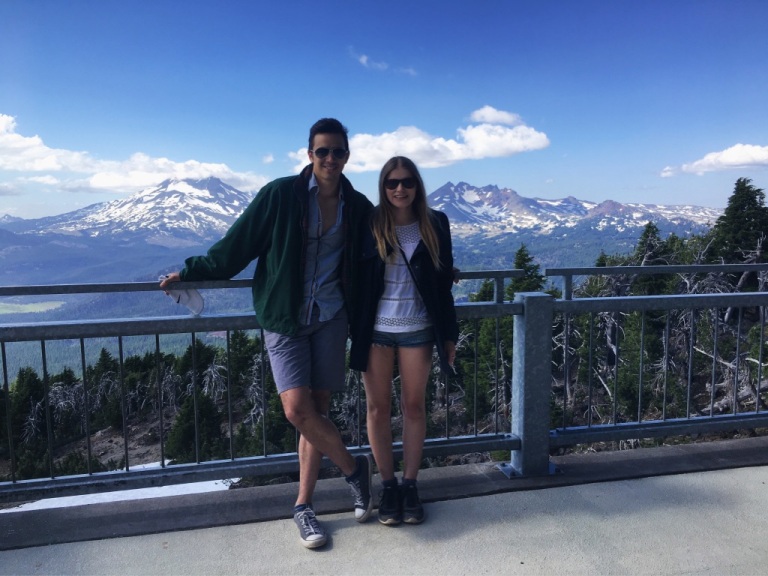 Have you been to Sunriver? Is there an experience I missed that is a must do for my next trip to Oregon this summer? Or have you got another recommendation for somewhere off the beaten track to explore in the United States? Let me know in the comments. Natalie x